Based on anecdotal evidence collected over my career as a PM, I had three theories:

To find out whether my anecdotal evidence was true, I set up a survey. With 18 questions on the role of a project manager, more than 250 people responded – half project managers and half non-project managers. They represented 40 countries and 12 industries. The full results of the survey will be available in a few weeks, but here are some thought-provoking initial findings. 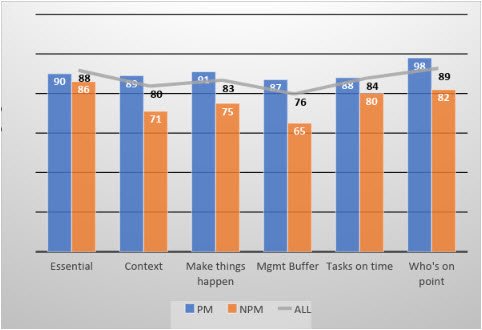 Happily, both groups agreed that the role of a project manager is essential to the success of a project. 86% of NPMs agreed with this statement as do 90% of PMs.

Both groups agreed that project managers provide context and purpose. The gap here is wider, with 71% of NPMs and 88% of PMs agreeing with this statement.

To a similar extent, we agree that project managers make things happen with 74% of NPMs and 90% of PMs agreeing with that statement.

The effectiveness devil is in the project manager details!

Something to note is the degree to which the two groups agreed – although their answers were generally aligned, they did not always answer with the same intensity! For example, we agree that PMs are essential, but only 50% of NPMs strongly agree while 74% of PMs do!

The elephant in the room – micromanagement

The good news is that around 60% of people in each group disagree with these statements.

What is concerning though is that 30% of NPMs and a surprising 21% (1 in 5) of PMs(!) believe that we are too task-oriented to be helpful.

Also, 29% of NPMs and more than 26% of PMs agree that project managers slow down the development and delivery by having too many meetings.

Back to the hypotheses:

What does all this tell us? Let’s start by reviewing the results against my theories.

Focus 1: The gap between the strength of our perception and the perception of our non-project manager colleagues on our role. Even where we agree in general, there are big gaps in perception – the degree to which the two groups believe a statement – when we dig deeper.

Focus 2: Lifting ourselves out of the details and keeping our eye on the big picture. We even perceive ourselves as micromanagers.

I believe that a lot of this relies on us changing our focus from process to people. It is often said that human factors account for 70% of project performance. Indeed, some studies have shown that measure to be as high as 81%  (Gertman et al., 2001). It behooves project managers to develop new strategies, to become students of human behavior, and weave behavioral theories into every process in project management.

Ruth Pearce, JD, PMP, PMI-ACP, ITIL ACC is the founder of Project Motivator (ALLE LLC) and is a certified coach trainer. She is the author of Be A Project Motivator: Unlock the Secrets of Strengths-Based Project Management. Ruth has 25 years of project and program management experience in financial services, state government and non-profits, working with teams across the globe. Her focus is on developing project management skills in human factors enabling them to build empowered and engaged teams that deliver. Ruth writes about communication, stakeholder management, and culture & behavior.

Don’t get lost in metrics, it’s still all about the people

How to create and unearth more benefits with program management

Building a positive work environment for your team

Dr. Michael O’Connor of Medtronic Becomes a Contributing Expert for...

In project management being uncomfortable can be a good thing

Creating a project charter for a Six Sigma project

What is a business strategy?

How to create a successful program...